The Big 6 focus on the environment

Responsible tourism is more than just a buzz-word at the Cape Town Big 6. Take a quick look behind-the-scenes to see how this is a central to each destination’s success, and find out exactly how the Big 6 are leading the way with initiatives that not only limit their impact on the environment, but in many cases work towards improving it.

Responsible tourism is now top-of-mind for most modern, forward-thinking tourism destinations around the world, and Cape Town is no different. When it comes down to it, though, responsible tourism should be more than a buzz-word. Rather, it’s when it’s so seamlessly integrated into all aspects of the experience and culture, that the benefits and impact are felt right through to the core of the destination you’re visiting.

As far as cities go, Cape Town is right on the mark. Back in 2002 the City of Cape Town adopted the Cape Town Declaration in order to formalise its policies, and ensure that responsible and accessible tourism is embraced across the city. At the core of this is the Responsible Tourism Charter, of which the Cape Town Big 6 partners are all signatories. So how does this translate into actionable results that are felt on the ground? 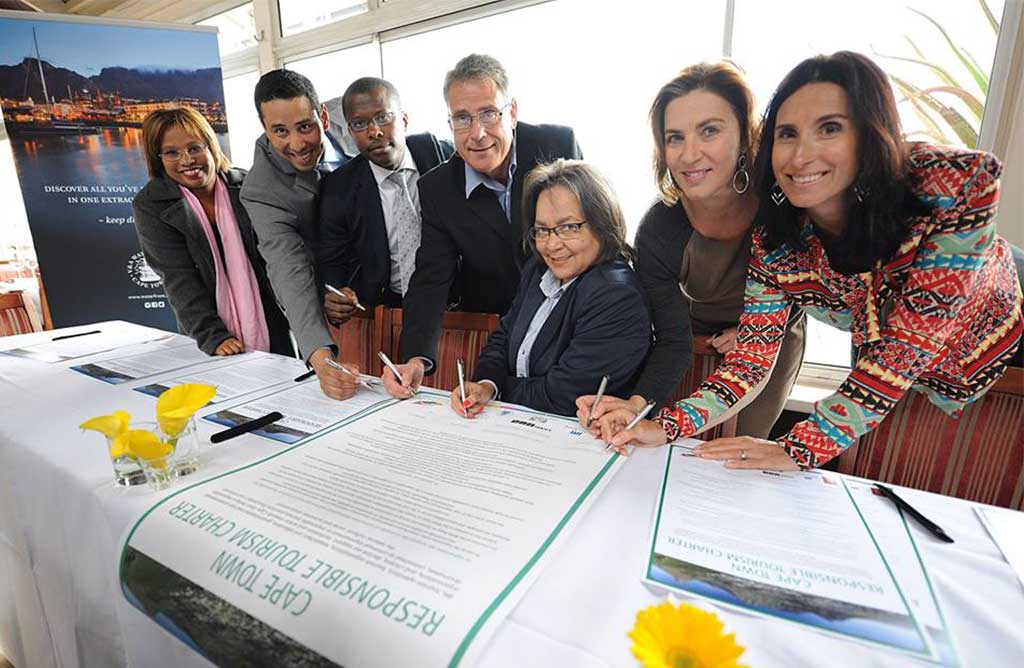 All Cape Town Big 6 destinations are closely integrated with the environment, be it sea, mountain or vegetation, and as such all place an emphasis on sustaining and supporting their immediate surroundings, with strong recycling and environmental management practices in full swing.

Cape Point, as part of Table Mountain National Park, has streamlined its operations to create minimal impact on the environment, which includes the careful re use of grey water for on-site vegetation. The Flying Dutchman Funicular also operates on 50% less electricity thanks to its advanced magnetic drive system, which also means no pollution is generated during the famous ride up to the Old Lighthouse.

As a bustling and vibrant wine estate, Groot Constantia has followed similar eco-conscious trends, and with the help of the City of Cape Town and SANBI, they clear away all alien plant species, and replace them with indigenous plants. And on Arbour Day this year, Groot Constantia planted trees in honour of their longest serving staff members as a living tribute.

Of course, as far as responsible ecological practices go, Kirstenbosch Garden is recognised around the world for its expertly managed indigenous botanical garden, set on the slopes of Table Mountain. The 528-hectare estate is a safe haven for rare and threatened species, the celebrated fynbos, as well as the more recognisable species, and is an amazingly accessible green zone.

In the more urban surroundings of the Cape Town City Bowl, the V&A Waterfront has lead the way with a strong focus on implementing initiatives to be more energy efficient, water-wise and encourage recycling across the destination. The V&A is in the unique position of not only being able to develop new, green buildings but as a landlord, are able to live their sustainability philosophy by implementing green initiatives across the property. A full carbon emissions inventory assessment has been conducted, and constant messaging aims to continue the eco-education of all visitors to this historical destination.

In recognition of its efforts, the Waterfront has seen a number of accolades and awards, including a Heritage Gold Environmental Certification, an Eskom ETA Award, the City of Cape Town Energy Efficiency Award, as well as a Lilizela Tourism Award for Energy Efficiency.

Tied to the initiatives underway at the V&A Waterfront are a number of endeavours at Robben Island, the departure point of which is situated in the premises. The island itself is a protected nature conservation area, and the dynamic ecosystem is monitored and safeguarded accordingly.

Table Mountain Aerial Cableway, located within a World Heritage Site and a National Park, takes its role as custodian of Table Mountain very seriously. The Cableway has adopted various initiatives focused on resource management (including water, waste and energy strategies) to reduce its impact on the environment.

In recognition of its responsible tourism practices the Cableway was named the overall winner of the Imvelo Awards for Responsible Tourism in November 2011. The awards recognise tourism and hospitality businesses that make a real, measurable and sustained contribution to Responsible Tourism. The Cableway is also the first tourist attraction in South Africa to be awarded Platinum Heritage Certification for its commitment to sound environmental practices.

So next time you’re out exploring your favourite Big 6 attraction, keep an eye out for the attention to detail that each have in place, and know that behind the scenes are teams working hard to maximise your enjoyment while constantly reducing the impact on, and in many cases actually giving back to, their spectacular surrounding environments.