In the news: Cape Town is at the top of every bucket list, and one of the most sought-after destinations in the world. The cruise terminal, operated by the V&A Waterfront, provides access to amenities such as customs and Immigration check-ins, baggage collection, foreign exchange, restaurants, and a variety of transport and tourism information services. Against the dramatic backdrop of Table Mountain, Cape Town is one of the world’s most attractive ports to sail into. Berth in the harbour is the marine gateway to Africa for cruise liner passengers. It is often their first introduction to the city, and an opportunity to create a positive impression of Cape Town and South Africa. Click here to download the Cape Town Cruise Terminal Port Guide.

On arrival, you will sail into Table Bay while being greeted by majestic views of Table Mountain and berthing at our world-class Cruise Terminal, which is ideally located within a 5-minute walk from the V&A Waterfront with its abundance of restaurants, shops, hotels and entertainment options.

David Green, V&A Waterfront CEO said: “The cruise ship industry is an important part of Cape Town’s ocean economy and of our city’s proud marine heritage. As beautiful as Cape Town is, if a passenger’s experience on arrival is unpleasant, it can affect their entire perception of the city. From international experience we know that the cruise line industry offers enormous potential for tourism growth, so we determined to extend the world-class experience the V&A Waterfront is known for to the Cruise Terminal.” Timeline
By 2014, the growing importance of the cruise ship industry caused Transnet to consider the development of a proper cruise terminal building in Cape Town. The original building with its open sides, served as a pre-cooling facility for fruit export making it clearly not fit for purpose.

July 2015
The Transnet National Ports Authority named the V&A Waterfront as the preferred bidder to manage the city’s cruise terminal in a two year redevelopment project. The bid involved operating the terminal building for multiple use to ensure year round activity.

December 2015
Transnet officially handed over the operation of the terminal to the V&A Waterfront as the preferred bidder of a Terminal Operator agreement. The 20-year agreement covers both the 23,407m2 land and building area. A phased approach was adopted for the upgrade of the overall 8,292m2 building.

September 2016
Work started on stage one of the project, which was to secure the sides of the existing 4,777m 2 building and refit the ground floor to comfortably handle the full passenger complement of the likes of liners such as the MSC Symphonica, the Queen Mary 2 and MSC Opera. This included creating customs facilities, immigration desks, passenger infrastructure and baggage handling services.

November 2016
Phase one was completed for the start of the cruise ship season, catering individually for each ship:
• All services required for disembarking and embarking was in place.
• Waiting time for document processing had been significantly reduced.
• Secure facilities were in place for immigration.
• Baggage handling was managed effectively.
• Tourism information and visitor services were available.
• A wheelchair-friendly ramp had been erected at the entrance.
• The visitor experience was more comfortable with ample seating, modern ablution facilities and food and beverage vendors.

The luxury German Liner Europa was the first ship of the season to experience the new facilities.

November 2017
Work commenced on phase two of the upper level with lifts, staircases, a mix of space for events, restaurants and various related tenants. The ample parking area catered for transport operators and locals collecting visitors. 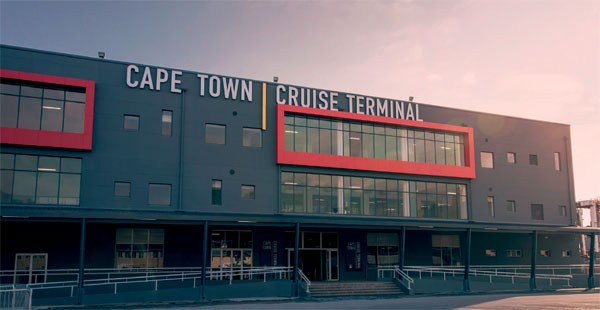 Cruise ship industry facts
• The industry is seasonal, running from October to May.
• The majority of ships calling at Cape Town carry under 1,000 passengers but vary between 200 and 3,000.
• In its first 2015/2016 season, the Terminal received a total of 44 vessels and processed 86 400 people, including approximately 37 655 crew members. The average processing time from entry to exit was 20 minutes.
• In the 2016/2017 season, the Terminal received a total of 53 vessels including visits from the Queen Elizabeth and the Queen Mary 2, the biggest cruise liner in the world at 365m. The Terminal processed 81 114 people, of which 15 806 were crew.
• In the 2017/2018 season, 40 vessels docked at the cruise terminal. The last cruise ship which docked at the end of April  was the Queen Elizabeth. During the season the Terminal processed a total of 80 074 arrivals, of which 64 915 were passengers and were 15 159 crew.
• Cruise ship tourists are more seasoned travellers who spend money on shopping, leisure activities and day excursions. They usually remain in port for approximately three days.
• When in Cape Town passengers and crew use local transport, visit local restaurants and shop for gifts, all of which has an impact on the economy and job creation.