Robben Island Museum (RIM) is home to an 18-metre high Lighthouse that was built in 1864 by Joseph Flack and is the only South African lighthouse to utilise a flashing light instead of a revolving light. It shines for a duration of 5 seconds every seven seconds and flashes white light away from Table Bay. The light is visible for 24 nautical miles. 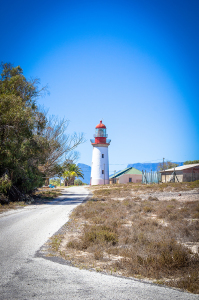 This Lighthouse forms an important layer in the history of Robben Island and in particular maritime history and RIM would like share its significant history in celebrating Lighthouse Day on the 7th of August. On this day, people are encouraged to visit their nearest Lighthouse to learn more about the history of lighthouses and their origins. The day aims to recognize the importance of lighthouses in maritime navigation and for providing ships safe harbour during bad weather. 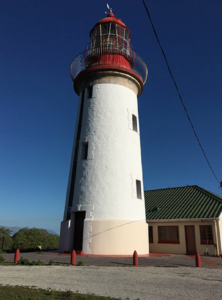 View of lighthouse from northeast with office building in background. Note pointed shells from the nearby 9.2 inch Artillery Battery used as bollards. Photographer: William Martinson – 2019

Traditionally, the 7th of August is celebrated as Lighthouse Day in the United States as a way to commemorate the signing of the Act for the Establishment and support of Lighthouse, Beacons, Buoys, and Public Piers by the U.S. Congress in 1789. In 1989, the Congress passed a resolution designating August 7 as National Lighthouse Day. 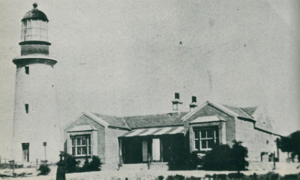 The lighthouse which was built in 1864 on Minto Hill, still stands and the light still operates. Note: Presumably the lighthouse keeper’s house – in the foreground – has however since been demolished. Submitted by William Martinson | Photographer: Unknown]

The Building of the Robben Island Museum Lighthouse

The first Dutch administrator at the Cape, Jan van Riebeeck (1652 until 1662), set up the first navigation aid to seafarers at the top of the then Vuurberg (translated as Fire Hill), the highest elevation on Robben Island. It is now known as Minto’s Hill (after a former surgeon-superintendent on Robben Island, Dr James Minto). Huge bonfires were lit on Fire Hill at night to warn passing ships of the rocks that surround the Island. 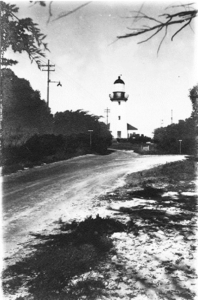 Architectural history and design of the Lighthouse

A fine original working drawing – traced in black ink on linen with a subtle water-colour infill applied to the rear of the drawing – is held in the Roeland Street Archives in Cape Town. The drawing, titled ‘Robben Island Lighthouse’ was signed by J. Scott Tucker, Colonial Engineer, Cape Town, dated 21 April 1859 and describes a tapered octagonal Lighthouse tower with seven floor levels. The working drawing includes seven octagonal Floor Plans, as well as an Elevation and a Section.

Of particular interest is that the design of the Lighthouse was intended to protect and elevate the warning light as well as provide a residence to accommodate the lighthouse keeper. The ground floor was identified as the Kitchen, first floor was set aside for the living room, second floor as the sleeping room and the third floor as a store room. The fourth floor – with domed masonry ceiling – was set aside as a store room. A double volumed space accommodated the light at the top most level.

A modern circular paved area now surrounds the concrete apron and is formed with concrete cobblestones. A row of 9,2-inch Artillery Gun shells were placed in vertical position at equal centres, forming a perimeter row around the second paved apron. Each shell originally had a circular ring (now mostly lost due to rust) welded to the pointed tip to accommodate a rope.

The full height of the lighthouse tower can readily be likened to a classical column and divided into three component parts, i.e. the base, the shaft and the capital.

The circular base of the lighthouse tower was constructed as a cylindrical plastered masonry structure and has an external measured circumference of 21 250 mm (equivalent to 70-foot with an associated diameter of approximately 22-foot). The base comprises of a smooth plastered shaft with a substantial wall thickness and a large external chamber at approximately door-head height, marking the transition between the base and the tapered shaft above.

From 1960 to 1996, the Island was under the administration of Correctional Services, formerly known as Prison Services and the life of the Lighthouse keeper was integrated with the life of the warders serving on Robben Island. They shared hardships and happiness together whilst living on the Island. During that time the Lighthouse keeper and his family were dependant on the Prison Services for fresh water, supplies and transport to and from the mainland.

According to Mr Dirk Smit, a former warder from 1987 to 1996, there was very little to do and go anywhere for young bachelor warders on Robben Island. They experienced the working conditions (life) as a type of chastisement as they were only allowed to leave Robben Island when they were off-duty every second weekend. This was the only time they could use to visit Cape Town to meet their loved ones, including their potential life partners or wives. However, some of the young warders saw opportunities with the daughters of the Lighthouse keepers on Robben Island. It was daughters of the late Lighthouse Keepers Ronny Smith (Lighthouse keeper on Robben Island from 1983 till 1984; and the late Stafford Swan (who took over from Smith in 1984 until 1992) that won the hearts of former warders Johannes Smit, Kobus Nieuwenhuys and Andries le Roux. 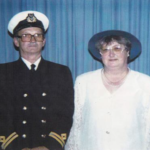 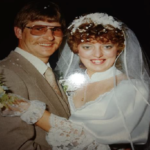 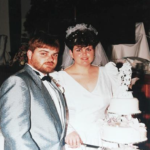 The architectural design of the lighthouse

The entrance door is deeply recessed from the external east face of the circular base and consists of a double, inward-opening teak framed and panelled door. Each door leaf has two fielded panels and the door is surmounted with a row of seven oval fixed fanlights – with the glass now removed and replaced with solid timber panels. The door and fanlight is accommodated within a hardwood timber frame. A broad granite step forms the threshold to the door.

The tapered shaft of the lighthouse tower was constructed as an un-plastered masonry structure, using hammer dressed local stone with flush jointing and ruled horizontal and vertical pointing with a painted finish – possibly not original. A total of 28 horizontal courses are clearly identifiable and are capped with three carefully dressed granite courses – the upper one now painted – which combine to form a simple, elegant coved projecting cornice to the underside of the Main Gallery floor.

Windows are let into the shaft of the tower and are framed externally with a raised and quoined plaster surround with a keystone. The windows are deeply recessed from the external face of wall. Sloping external plastered windowsills form an integral part of the window surrounds. The windows are all either placed on the axis of the front door or on the cross-axis and the sill heights relate to the various floor levels within. A black painted ‘navigation’ line is painted on the east face of the tower and it is presumed that this was originally a navigation aide to boats approaching the Faure Pier.

The capital consists of the Lantern Room, accommodating the lamp and the complex lens with the Service Room directly below. The external Main Gallery with ogee profile metal balusters forming a balustrade – with ball finials fixed at intervals to the top face of the handrail – provided an external circulation space around the Service Room. An additional narrow raised Lantern Gallery provided safe access for cleaning the external faces of the Lantern Room glass.

The glazed windows of the Lantern Room are an interesting arrangement of 16 tapered steel framed windows. Each tapered window is sub-divided in its height into three panes with two horizontal v-section glazing bars. Every tapered window was inverted relative to its neighbour – creating an alternating facetted glazed curtain wall on a circular plan. The upper panes of two tapered windows – each on opposite sides of the lantern – were provided with a window opening. Robust rectangular metal brackets were fixed externally to the steel mullions as points of attachment for window cleaners.

The walls of the Service Room comprise of 16 rectangular flat cast-iron panels bolted together, following the same alternating ‘beat’ established by the Lantern glazing above it. On two opposing sides of the Service Room a ‘full’ panel of the cast iron wall in each case accommodated a narrow door providing access onto the Main Gallery.